Americans have been strapped into a brutal emotional rollercoaster ride for the past two years, reeling from an exhausting mourning period with a front-row seat to the societal decline and deterioration of democratic values under the Trump administration. Right-wing populism is on the rise, emboldened by nationalist movements in Western Europe that formed out of a place of resentment and anger sparked by a growing refugee crisis and economic downturns. Countries such as Germany and Italy are being hit hard with an influx of refugees from the Middle East, rising crime and unemployment, and dissatisfaction in the euro, leading to the steady normalization of nationalist parties across the region, a xenophobic epidemic carrying very real consequences.

In the summer of 2016, voters in the United Kingdom voted to separate from the European Union in a split known as Brexit out of similar conservative economic and social fears. The prominence of populist candidates across Europe points to a shared narrative of anti-immigration frustrations that are manifesting themselves at the polling booths, from empowered far-right parties in Austria, Italy, Hungary, and Slovenia, to the near victory of Marine le Pen and her corrupt National Front party in France.

The plight of contemporary populist rhetoric has now landed in Brazil under the shadow of Jair Bolsonaro, a polarizing Presidential candidate who promises to “break the system” with an array of hardline conservative policies that evoke a return to the nation’s brutal authoritarian past. With 46% of the vote from the first round of elections, Bolsonaro won popular support by tapping into a deep well of resentment over corruption scandals and increasing crime rates contributing to the rapidly growing socioeconomic divide in Brazil. A recent Gallup poll indicates that 77% of Brazilians regard their government as being highly corrupt and are skeptical of the integrity behind the electoral system by which government officials come into power.

Bolsonaro, a former army captain and 7-term legislator, has advocated for restoring Brazil to a military dictatorship, invoking an era of Brazil’s repressive political history that was responsible for brutally torturing and murdering hundreds of its dissenters. In a 2014 report by the National Truth Commission, it was also found that the United States had spent years teaching torture methods to the Brazilian military in supporting the coup.

Aside from his anti-democratic ideals and deplorably sexist and racist remarks, Bolsonaro also opposes abortion rights and affirmative action initiatives created by the former Workers’ Party. On the growing issue of crime, he promises to toughen prison sentences, give police forces greater authority to kill, and make guns more accessible to obtain for civilians. He is hostile towards the press, discrediting large news organizations that do not cover him favorably, and often uses social media to reach his followers.

This political zeitgeist in Brazil can’t help but trigger an unsettling deja vu for many Americans that saw the evolution of an unrefined and unqualified real estate mogul turned President of the United States. Bolsonaro and Trump share many similarities, spanning political beliefs, campaign tactics, and utilization of populist and often controversial rhetoric to bolster the forgotten masses of a nation struggling under social and economic stressors. The past two years in America exemplify the dangers that right-wing populist ideals can have on our standards of social rights, economic equity, and the demands of the working class and minority communities. Immigrant children are being detained from their families, forced to show up in court and defend themselves, some of the youngest at two years of age. Travel bans on Muslim-majority countries were enforced by executive decision, only to have the nation’s courts strike those policies down as unconstitutional. These are merely a few instances of xenophobic sentiments taking root in American society after Trump’s victory, but there have been many others since then. 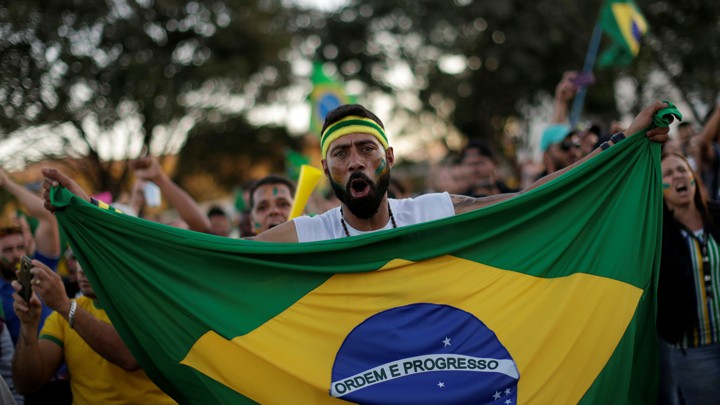 However, despite the massive opposition to Bolsonaro, polls show his victory to be likely. Young people compose about 60% of Bolsonaro’s followers, admiring his unconventionality and his critique of the past administration under Dilma Rousseff which sent Brazil into its deepest recession, ultimately leading to her impeachment, and damaging the integrity and credibility of her Workers’ Party. Bolsonaro will be facing former education minister and São Paulo mayor Fernando Haddad of the Workers’ Party in the run-off elections on October 28.